This is the most complete, well-written article I've seen on how the U.S. and Cuba reopened a relationship.

The article opens with :

"On a rainy day last December, President Barack Obama gathered a small group of senior officials in the Oval Office and placed a telephone call to Raúl Castro. Sitting on a couch to Obama's left were National Security Council aides Benjamin Rhodes and Ricardo Zuniga, personal emissaries whose 18 months of secret negotiations were about to culminate in the first substantive conversation between the presidents of the United States and Cuba in more than half a century." 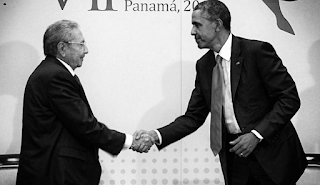 We can't quote the article, and it makes no sense to summarize it. Just read it. It's good.


Inside the Crazy Back-Channel Negotiations - US-#Cuba ... by Mother Jones