We were in Holguin, Cuba this past week. This small city is near the northern coast, above Santiago de Cuba. While popes have visited Santiago several times, none has ever visited Holguin.  Soon, Pope Francis will visit both cities after an initial stop in Havana.

The highway between the airport and the city is being replaced with a modern thoroughfare. The Pope will fly from Havana to Holguin, so he will have to travel on this highway into the city.

I cannot fathom that the highway will be finished in time for the Pope's visit a month from now. While they have made much progress, I strongly believe there's just too much more to do.

Various streets within the city are closed for renovations.  A number of buildings are being painted and spruced up.  My taxi driver said, "It's silly to make the outside look nice, when water is pouring through the roof and walls of these buildings." 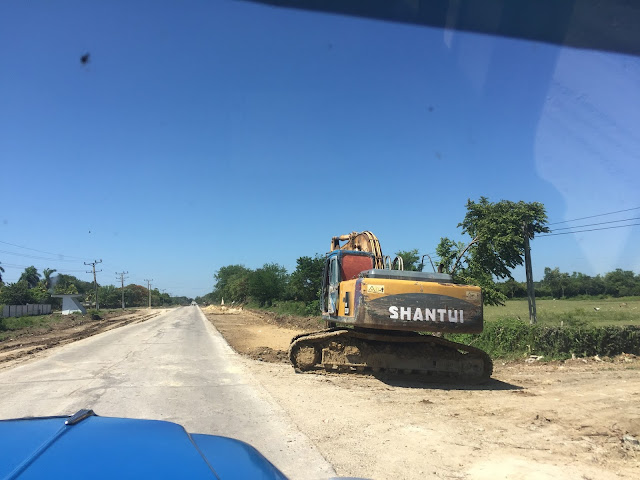 The stage where the Pope will speak is already set up, outside, adjacent to the not-very-elegant Hotel Pernik, where I stay when in Holguin.

A number of articles have been posted on the visit.

"HAVANA — Pope Francis has added a stop in Cuba to his planned trip to the United States this September, a visit that will highlight his role as a peace-broker between the two countries and offer a boost to their efforts to mend relations after 50 years of rancor.

Francis will make a Cuba landing in late September before his previously scheduled stops in Philadelphia, New York and Washington, where he is expected to meet with President Obama and address Congress.
......
Whatever his plans, Francis will almost certainly be received warmly by a Cuban public that has shown a great deal of enthusiasm for papal visits in the past, if less so for the habit of disciplined church attendance.
With near-universal support among ordinary Cubans for reconciliation with the United States, Francis will give an important political boost to the only significant independent institution on the island — Cuba’s Catholic Church — and its role in nudging communist authorities toward broader reforms."