The Associated Press posted an article about the flag-raising, by Anne-Marie Garcia and Michael Weisssenstein, in which they say that Cubans are making pro-democracy statements, without requesting anonymity.

The article also states that the Cuban government official news television stations showed the entire speech of U.S. Secretary of State John Kerr, in which he promoted democracy, and the entire-speech was published in the official newspaper publication, Granma.

In 1960, the United States enacted a trade embargo on Cuba. The following year, it closed its Cuban embassy, formerly ending diplomatic relations between the two countries. Above, an American flag is rolled up as the US embassy in Havana prepares to close. AP 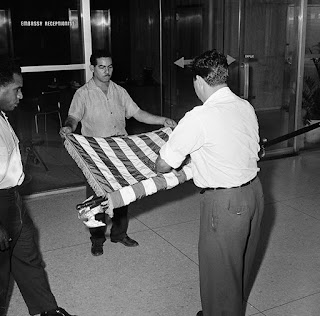 Link to this and another article: