The Associated Press has published an article titled,
"US sees surge in Cuban rafters aiming for Florida"
The writer cites the reasons Cubans still flee and the fact that more rafts have left this year than last. It describes the treacherous trip, and dangers the people endure.

It explains the ridiculous "wet-foot, dry-foot" rule, which states that if the Cubans reach U.S. soil, they can stay, but if they get picked up at sea, they are returned.  Interestingly, one can leave the Cuban shore, and arrive at the U.S. military base in Guantanamo and be declared free, as it is deemed U.S. soil  We have a relative who did just that many years ago.

I've always thought that it was a silly U.S. rule, to return people just because they can't get to our soil.  But this article actually says this is a rule that was negotiated by the two countries.  About that subject, the article says:  "Twenty years have passed since Fidel Castro eased political pressure on his communist government by telling Cubans they were free to leave. His declaration in August 1994 launched a sudden exodus of 35,000 islanders. Thousands were picked up by the U.S. Coast Guard and spent months behind barbed wire at the U.S. Navy base on Cuba's eastern edge.

Finally, President Bill Clinton reached a deal with Castro: The migrants at Guantanamo could come to the U.S., and at least 20,000 other Cubans a year could get U.S. visas. But Cuban authorities would resume patrolling to keep people off unseaworthy rafts, and the U.S. would enforce a "wet-foot, dry foot" policy: Anyone intercepted at sea would be returned to Cuba; any Cuban reaching U.S. soil could stay.
It was a political compromise, meant to resolve a humanitarian crisis. But it never stopped Cubans from risking their lives to cross the 90-mile Florida Straits: Another 26,000 Cubans have tried it since 1995."
http://bigstory.ap.org/article/us-sees-surge-cuban-rafters-aiming-florida
0 comments

"Cuban Photographer: Do You Recognize This Girl?" - Associated Press Article 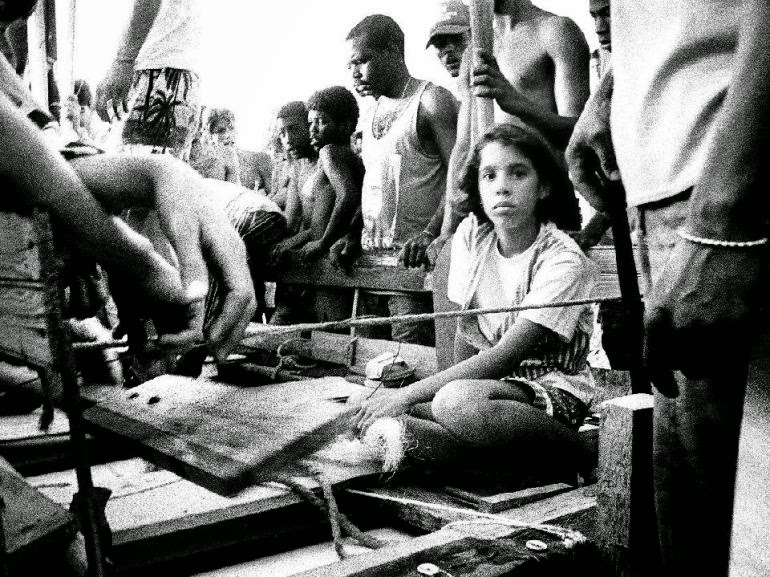 The article is about a photographer named William Castellanos.  He took a number of photos of Cubans who were preparing to escape the country. This particular photo shows one young girl looking not the camera. He said it alway has haunted him.

The article says, "William Castellanos snapped the black and white photo in August 1994 when he was an art student in Havana, capturing the moment when 35,000 Cubans took to the sea in makeshift rafts."

The article cites his web site, http://www.exodus94.com, where he tries to find people shown in the photos.

Like the Cuban government’s constant fumigation inside dwellings and buildings to combat the mosquitoes that attack its people with the Dengue virus, it also continues to swat the U.S.’s discreet attempts to convert its people.

The U.S. has again been criticized for clandestine operations in Cuba.  I have never understood why our government thinks we are perfect and should try to fix the world.  Sometimes we are allegedly protecting ourselves from some danger. But Cuba isn’t a danger to us in any manner.  And anyway, it seems our inept attempts to fix it to what we believe is right (No, I don’t know who “we” is) has again resulted in a comical, embarrassing failure that is making the Cuban government angry and is not helping anything.

A few months ago, we learned that our government initiated a fake social media communication scheme (known as “Cuban Twitter” or “ZunZuneo”) to lure Cubans into joining, unknowingly setting themselves up to receive our propaganda that was designed to incite them to take action against their government.   That action could easily put those social media followers in danger, when they simply thought they were finally able to follow social media. Their government could have believed they were dissidents, whether or not they were. The ruse proved to Cuba that its constant concern about open Internet use was a realistic worry.

That story was in the news for a while, causing us embarrassment, and making us wonder whether Alan Gross, who is in a Cuban jail for taking communication devices into the country, really was working for our government.  The articles quoted below raise that same question. Our government has denied everything else about its involvement other than facts that are so obvious they cannot be denied. But, as is mentioned in some of these articles, some government officials admit the infiltration, but deny any negative purpose.

Now, that the Cuban Twitter issue has somewhat disappeared from the news, new allegations have arisen that may be even worse.

According to Associated Press reports this past week, the United States “secretly dispatched young Latin Americans to Cuba using the cover of health and civic programs to provoke political change, a clandestine operation that put those foreigners in danger” The article even talks about Alan Gross as an example of what could have happened to these young people .The article states, “Beginning as early as October 2009, a project overseen by the U.S. Agency for International Development sent Venezuelan, Costa Rican and Peruvian young people to Cuba in hopes of ginning up rebellion. The travelers worked undercover, often posing as tourists, and traveled around the island scouting for people they could turn into political activists.”

The story continues, stating, “… their efforts were fraught with incompetence and risk … Cuban authorities questioned who was bankrolling the travelers. The young workers nearly blew their mission to ‘identify potential social-change actors.’ One said he got a paltry, 30-minute seminar on how to evade Cuban intelligence, and there appeared to be no safety net for the inexperienced workers if they were caught. ‘Although there is never total certainty, trust that the authorities will not try to harm you physically, only frighten you,’ read a memo obtained by the AP. ‘Remember that the Cuban government prefers to avoid negative media reports abroad, so a beaten foreigner is not convenient for them.’”

Perhaps there hasn’t actually been an admission by U.S. government agencies. The Havana Times this week reported, “The administration’s clandestine programs in Cuba received the support of congressional Republicans from Florida, Ileana Ros-Lehtinen and Mario Diaz-Balart, who support actions to ‘promote democracy’ in Cuba.”

“That USAID is using measures to promote democracy in Cuba is no secret,” said Ros-Lehtinen. This congresswoman believes in the need to ‘keep the pressure on the Castro regime and continue to support the Cuban people, who live under oppression every day.’”

Diaz-Balart said, “…the efforts of the Department of State and USAID to bring information to the Cuban people and find creative ways for Cubans to communicate among themselves and with the outside world, are precisely the kind of activities that the United States should continue conducting in closed societies.”

“America has a noble history of helping the oppressed achieve freedom. We should continue to do so in Cuba and in any other corner of the world where freedom is threatened,” said Diaz-Balart, who like Ros-Lehtinen is Cuban origin.”

The AP article sure seems to have evidence that it was more than just promoting democracy.

This week, an article with a AP Washington by-line was posted, with the title of “Cuba rejects covert U.S. Youth Program.” The article says a top Cuban diplomatic official stated that the U.S. government “has not desisted in its hostile and interventionist plans against Cuba, which seek to create destabilizing situations to provoke changes in our political order."

I have been in Cuba many times. I have seen poverty and unhappiness. Yet, I have seen poverty and unhappiness throughout the world, including the United States. I realize that Internet use and the ability to communicate via social media is difficult in Cuba. But no wonder the government continues to prevent such free communication.  I have never felt any danger, even when I am taking photos of areas that travel groups are steered away from, and even when soldiers and police inquire about what I am doing.  Cuba has initiated huge financial changes in in the past couple of years, some of which we may not agree with.  Some Cubans’ lives have improved as a result. Those who work for the government and its hotels, restaurants, and other government-owned and operated enterprises, still receive the paltry pay that definitely keeps them in the poverty level.  But, again, probably no government is perfect in how it addresses the needs of the masses.

If you recall, it was at the beginning of the Obama administration that the U.S. opened Cuba travel to those visiting family and to many types of groups. Many Cuban-Americans were delighted to be able to meet family for the first time, or see family they had not seen since the 50s or 60s.  But I begin to wonder whether the opening up of travel and the ability to send items and money was the beginning of a plan to do the kinds of things the U.S. government has apparently been doing for years now.

Why does the U.S. government think it has to change the world? Who decides which country to invade, which to bomb, and which to torment and harass? Does anybody think about the ramifications of such silly, poorly-planned activities as the U.S. government has apparently carried out in Cuba?