A Man of Reason? With all the strong arguments from all sides about the embargo, travel to Cuba, and what to do, if anything, about Cuba's situation, this man's continual position, over many years, in spite of considerable diversity, is enlightening. Cuba's state newspaper, Granma, has reported the plans continue towards eliminating the two types of pesos.

"We Shall Return", Starring Cesar Romero, Filmed in Daytona

We Shall Return is a very melodramatic, 1963, black and white, B movie, but if you are interested in Cuba, what happened in the early years of the revolution, Cubans fleeing, Cubans returning to fight, and Daytona Beach, Florida, it contains all of it.  Cuban intrigue, post Batista / early Castro.  The Cuban military look just like the Barbudos, or like Castro himself. Cesar Romero, his son, and the son’s girlfriend escape Cuba on nice cabin cruiser, while being shot at by bearded soldiers dressed like Fidel, and arrive in Miami. 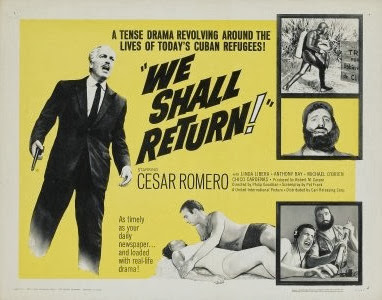 They are looking for another son of Cesar, who is on a different political side, and are told he’s in Daytona Beach. The refugees board a Greyhound Bus to Daytona Beach.

They say they do not want the charity to which they are entitled, and want to work.  But it’s not easy finding work in Daytona.  The girl is offered a job in a strip club, which she accepts, until her future father in law has a fit.  Cesar Romero. enters a diner, asks for a glass of water, and doesn’t want to buy anything.  The man working in the diner says, “Ever since that revolution down there, every spic and his brother thinks they can come in here …”  Ugh.  Embarrassing that that would be how Daytona is portrayed.

Since Cesar can’t find work, Nina takes the job.  She buys food and goes home.  Cesar scolds her and tells her never gain. She meets a young hustler, who sends her to another place to work, as a scantily clad cigarette girl at a bath and tennis club. (that is the only part that seems to be filmed elsewhere, in St. Augustine.

Listening to Cuba radio, the girl learns her brother has just been executed as a traitor. The film also shows the problems that arose when Cubans thought they should follow Fidel to escape the tyranny of Batista, only to later become disillusioned. It reflects how people followed one or the other and then suffered, or changed their minds.

Political disagreement regarding Cuba, is a main thrust.

You’ll see the City Island docks, the Beach Street firehouse, the Yacht Club, the old City Island Library, Seabreeze Blvd. the boardwalk, the clock tower, an actual phone booth near the clock tower, if you’ve ever seen a phone booth, the pier, cars driving on the beach, etc.  At the end, you’ll see everything around the lighthouse, the dunes at the inlet and even that old abandoned building made of some brick-like material that was on the point at the inlet.  Recognizing the Daytona landmarks is entertaining.

Here is the IMDB information about the movie. You can perhaps find it there.

We Shall Return is a 1963 American drama film directed by Philip S. Goodman, starring Cesar Romero and Anthony Ray. It follows the flight of and eventual return of Cuban refugees following the Cuban Revolution of 1959. It features a fictitious plan to overthrow Fidel Castro, which proves successful, allowing the emigres to go home. Shot predominantly on location in Florida, the film would have its world premiere there as well, on February 15, 1963.[1][2]

Instead, I found it through the I Grew Up In Daytona Beach Facebook Page, which has a link to a UTube video.  Warning, th
ere’s a very silly introduction to the UTube video, but once you get past it. The whole movie is there.

Alan Gross Petitions Obama to Get Him Freed

"Why am I still here? With the utmost respect, Mr. President, I fear that my government – the very government I was serving when I began this nightmare – has abandoned me,” Alan Gross wrote in a letter to Obama."

Interesting text, considering that Gross and the U.S. have both told Cuba Gross was not on official business for the U.S.

Alan Gross has been in jail for a considerable time, for taking "communication devices"  in for Cuba's jewish citizens.  He reported them on his customs form, and reported that he was taking them in.

From the below article:

"Gross’ letter was read aloud by his wife at a vigil in Lafayette Square across from the White House on Tuesday to mark his fourth anniversary in jail. on December 9.
“It is clear to me, Mr. President, that only with your personal involvement can my release be secured,” Gross wrote.
"Gross said he was in Cuba to set up communications equipment to give unrestricted Internet access to Jewish groups. A Cuban judge said that activity was a crime against the state and sentenced Gross to 15 years."
"Tuesday’s vigil follows a letter sent by a bipartisan group of 66 senators last month that urged the president “to act expeditiously to take whatever steps are in the national interest to obtain his release.”
"A separate letter signed by 14 senators, including two of Cuban descent, Robert Menendez of New Jersey and Marco Rubio of Florida, took a tougher line rejecting any negotiations, calling on Obama to work toward securing Gross’s unconditional release.