Mary Murray of NBC News writes that, “United States diplomatic officials are helping their Cuban counterparts resolve a banking snafu that has forced the suspension of consular services, impacting travel to the island nation. Cuba suspended all its consular services out of Washington until further notice late Tuesday, and is no longer issuing passports or visas, saying no U.S. bank would handle its business.”

[The below photo (from the article) is of the U.S. Interest Section in Havana. Because there are no official relations between the two countries, instead of having embassies or consulates, they have these interest sections, to issue visas, etc.  Some years ago, the Cuban government put these flag poles and other architecture to obscure the building and prevent the U.S. from promoting its point of view, which the U.S. has readily admitted it does.] 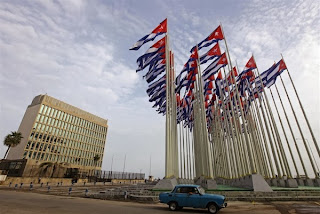 The editors of this blog have spoken to people who received entry permits and visas for family travel to Cuba this week, and they indicate they were issued rather quickly. But their travel agent instructed them to deliver payment to the Cuban Interest Section in Washington, D.C. via money orders issued by the United States Postal Service or Western Union only.

Apparently the Cuban Interests Section was using Buffalo, NY-based M&T Bank, but it declined to offer further banking services.  It is believed that this move by the bank is not intended to be a political statement, and is merely a business decision. Nevertheless, the Cuban government is apparently taking action by limiting the number of visas it issues.

The  article further states that the U.S. “State Department said it was ‘actively working’ with the Cuban Interests Section to find a new bank. The U.S. government seeks to help foreign missions in the United States that have trouble obtaining banking services, while ensuring the continued security of the U.S. financial system including through appropriate regulatory oversight,” the department said in a briefing. "We would like to see the Cuban missions return to full operations.”

Considering that the U.S. permits citizens to travel to Cuba for family visits, or for cultural, “People to People” exchanges, or for religious missionary reasons, or a number of other reasons, it truly would make no sense for the U.S. government to shut the back door by causing banks not to do business with the Cuban Interest Section. So we certainly hope that is not the case.