William Potts, an American member of the Black Panther movement hijacked a plane in the U.S. in 1984 and forced it to take him to Cuba, where he thought the Cuban government would give him guerrilla training. Instead, Cuba jailed him for 13 years for piracy. When he was released from prison, he remained in Havana but always wanted to return to the US.

Potts has now returned to the U.S. He cleared his return with the U.S. Interest Section in Havana, but he expected to be arrested on landing, which he was.  The Associated Press quoted him as saying, "I'm ready for whatever. My position is, of course, I did the crime and I did the time, and the United States has to recognize that."
Photo from the following BBC article. 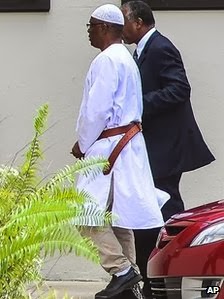