An End to the Off Dual Currency System in Cuba?

One of the most surreal features of the horrible financial situation under which Cubans live is that the government gives its workers and retirees one type of pesos, while tourists and those who work with tourists use another kind.  The government gives pesos cubanos, while the tourists use pesos convertible, known as CUC (pronounced with letters, like "say-oo-say", or "ku".  Travel books for tourists usually don't say much about it, since visitors aren't likely to come across pesos cubanos, unless they get scammed by trying to exchange money on the street, or they are shopping where the natives shop and enter a store that only takes pesos cubanos.  The value of a peso cubano is generally about 1/10th of the value of a CUC.

Just like there are money exchange kiosks  to convert from foreign money and CUC, there are those to exchange CUC and pesos cubanos. Items that are rationed, like rice, sugar, coffee, and some toiletries, are purchased in stores that only accept pesos cubanos, because that is how the Cuban government handles the rationing - money earned from the government is used to receive the reduced-price ration items.  The ration book is called the libreta.  Taxi drivers, owners of private bed and breakfasts (casas particulars) and others who work solely with the public, which means mostly foreigners, don't receive pesos cubanos, and pay tax on what they make.  So, if they want to go to a peso cubano store to buy something, like something in the libreta. 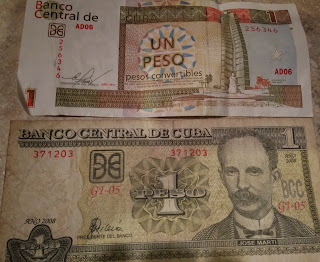 Everybody who works for the government, which includes doctors, receives only pesos cubanos.  They could make more money driving a taxi, but then buying items with CUC is more expensive.

One time when I was in Havana, I got pink eye.  I went to a pharmacy that took CUC (i.e. for tourists) on Paseo del Prado, and they didn't have any medicine for pink eye.  I returned to the casa particular where I was staying.  The owner did not have pesos cubanos, but went out to obtain some, and then went to a pharmacy that took pesos cubanos, and got my medicine. If a foreigner goes with a Cuban to any museum or national historical site, the foreigner pays with from one to 3 CUC, and the Cuban pays with the same amount of pesos cubanos.  Usually the guards are very nationalistic and won't accept a ten cent CUC for a single peso cubano. 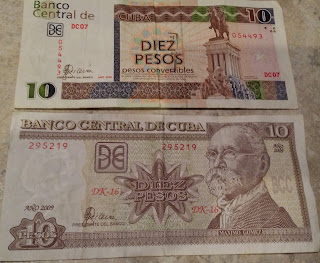 At the annual international book fair, which takes place in Havana and other cities, a foreigner shouldn't think he or she will be able to actually buy a book.  It's not international in that sense.  One has to get some pesos cubanos to buy books.

The Associated Press has published an article about Cuba's intention to eliminate the dual monetary system.  The article is "Cuba Faces Challenges in Push to End Dual Currency."

The article explains the odd system, the problems it creates, and the ramifications and challenges involved in eliminating it.