Yoani Sanchez Is on the Move 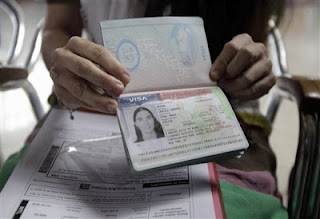 Yoani Sanchez's international trip has commenced. After years of being denied the right to travel, the Cuban dissident blogger, is in Brazil, the first leg of a three-month long multi-country trip.

She was surprised to note that no officials interrogated her, took to her a separate room, searched her or paid any attention to her.

The Associated Press has posted articles on the trip.  The Miami Herald has posted the AP stories.

Yoani tweeted [translated] “At the arrival many friends were welcoming me and other people yelling insults. I wish it would be the same in Cuba. Long live freedom!” 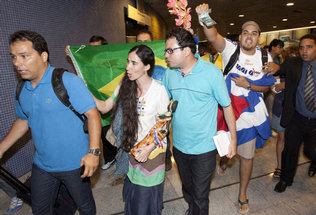 Yesterday, the Miami Herald showed an Associated Press article written by Marco Sibaja, stating that Yoani was heckled by pro-Castro demonstrators in Brazil as she attended a documentary that featured her.


The article said, "Small groups of protesters met Sánchez when she arrived earlier Monday at two airports in Brazil’s northeast. They called her a “mercenary” who was being financed by the CIA and tossed photocopied U.S. dollar bills her way. One protester got close enough to pull her hair."