How Could One Tyrant's Health Affect A Separate Country

Speculation about Chavez’ probable impending death is swirling in the Caribbean.  The rumor mill indicate that he was opened and closed today, and has months or less to live.  His own words published in international press reports yesterday support that thought.

Many say that Cuba’s reforms of late are directly related to a fear that Chavez would die, and aid and petroleum would dry up.  The article below refers to the fear of the so-called “Special Period”, during which Cuba’s economy crashed after the Soviet Union collapsed.

Quoting opposition economist Oscar Espinosa, the article states that "Venezuela is now what  the Soviet Union was for many years until 1990, with the difference that if  (Venezuelan) aid ceases now the consequences would be much worse, because Cuba's infrastructure is worse than  it was at that time."

Chavez has strongly suggested that Maduro will take over the country, and we suppose that the hope of the Cuban government is that he will manage to keep all programs, including Cuban aid and trading alive, but who knows.

The people of Cuba, most of whom still live in the repressive and impoverished remnants of the Special Period, must be in great fear that things will be even worse if the Venezuelan support ends.

This photograph is in the article.  It’s a great picture, showing a photo of Chavez, and saying, “We are going to be the true dream of Bolivar and Marti. “ 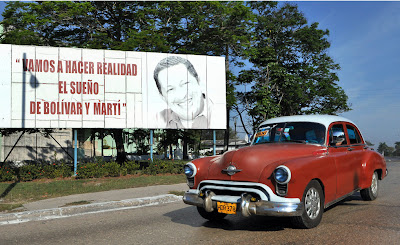