Some time ago, I posted a number of posts with photographs of Cuban people being taken to the United States on a ship named Shirley Lykes.  Links to the prior posts appear here.  The United States had delivered a great amount of supplies on the ship in exchange for Bay of Pigs invasion prisoners, and their families.

I also had found and posted at the time a link to an official video of this event:

A couple of months ago, one year after posting the photos, I was contacted by a passenger on the ship.  She said, “I was 18 years old and traveling by myself when I got on the Shirley Lykes. My memory is that few hours after I have boarded the ship a Red Cross representative came to our compartment to announce that the government had given permission to leave to more passengers that originally agreed to, and he wanted a vote from us.  Should they allow them to get on the ship or should they tell them to go home and wait for the next ship?  The vote was unanimous: "Let them board until the ship begins to sink".  Consequently, since they only had provisions for 1,170  people, there were only that many cots and we ended up 4 to a cot.  Of course we sat all night.  I wish someone else that was there will collaborate with my story.  I remember the number being 4,000 (maybe because we were 4 on each cot).”

She said that she wished she could thank the Red Cross workers and maybe communicate with other passengers.  I said, would you like to meet the Chief Mate who worked on the ship during that trip -- the same man who delivered a video from which I obtained the photos.  She said she would.
Recently, they met.  It was a beautiful evening.  He brought three photo books with very clear photos of the event, much clearer than the old video.   Here they are: 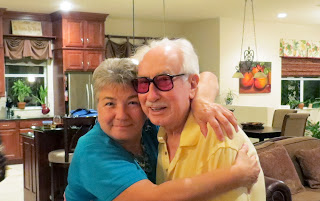 Immediately after they left, I checked my e-mail and found an email from a man who was a young boy on the trip.  I sent him a copy of the video and put the two passengers in touch with each other.  If any other passengers want to communicate, write to armstrongmediagroup@gmail.com and I will put you in touch.