I see that this post has been popular on Twitter, and that some have translated my poor Spanish English translation again.  This is how the message originally came to me:

Pencils and Erasers In Cuba

I asked my cousin what I should bring for him and the family next time I travel to Cuba.  The reply is interesting [my translation]:

“I think the most important are pencils to write. We have pencils here in Cuba, but, I'm not lying, they are so bad and old -- graphite that has rotted (I guess without exaggeration that pencils are still the Russian season) and to sharpen them twice, the whole pencil disintegrates.

We also need erasers, but not as many as you sent last time.  Last time, we gave erasers to our son to take to school. You gave us large erasers and the ones that fit on a pencil.  He lost (or gave away) several erasers.  We punished him strongly.

Now, we attach the erasers on a string of thread for him to wear on his neck. When he comes home, we inspect that he has not misplaced the eraser.  Since he no longer loses them, we only need two or three more for the school year. “
0 comments

Last week a festival to promote web-based technology was put on in Cuba.  Although some Cubans blog, tweet, and communicate with the world through technology, phone based Internet access is not available, regular Internet access is hard to come by, and most people do not have the resources to purchase devices to utilize them.

According to an article in Translating Cuba, specifically http://translatingcuba.com/?p=19208 the event originated in Spain, where it was begun in 2006. José Luis Antúnez states that the promoters, of which he is apparently the leader, “are motivated and encouraged by the will to serve.  To contribute in some way to the use of the web in different sectors of society.”

Another fundamental reason was that there wasn’t any kind of national conference to analyze blogging and the latest trends on the web in Spain. In the United States, from the early 2000s, they already had these events. And in Europe they are starting to take off. Paris organized “The Blogs” in 2005, now known as ‘The Web,’ and this was the trigger for me to try to organize something similar in Spain.”

Antúnez says he met with Benito Castro and Luis Rul in 2006 and proposed the idea of “trying to differentiate ourselves right from the start from the events in other countries, with a very relaxed atmosphere, approachable, family-like.”

He says that he was in Havana for the Click festival, and “was very positively impressed by the hunger for technology that I saw in some people and especially in some university freshmen who are forbidden to connect to the web until they are sophomores.”

“And what struck me most is that Cuba is a country that is disconnected from the world. Internet access is exceedingly slow, expensive, and available only in some hotels, the universities, in Government buildings and in the embassies. At least cellphones have arrived and despite the high prices of text messages it’s a technology in common use. If right now they shut off your Internet connection at home and on your cellphone, and you had a black-and-white screen Nokia, and a Pentium I PC without access to the web, do you think you would continue to Tweet? To blog? How? … one of my worst nightmares. Sadly it is a reality in many countries.

Mr. Antúnez  says, “the CLICK Festival (#FestivalCLIC )was born from a collaboration between several Cuban initiatives such as Estado de Sats, the Blogger Academy… and EBE from Spain, to create in Havana a reference point to evangelize about the use of the web in Cuban society.
The first CLICK Festival was held June 21 to 23 and “every Cuban is welcome, regardless of their ideology. [emphasis added] The Festival is a technological and inclusive event. We will be talking about new trends in the web, there will be blog workshops, there will be music…”

In the article, the following question was posted, and Mr. Antúnez answered: “What technological object would you take on a one-way trip to Cuba… to that other island of the disconnected?”  Answer: “an iPad full of applications that could be used offline.”

The author was asked about the hottest topics regarding Internet usage in Spain, and he said he is “very interested in seeing how politicians go after what they call “the internet vote” without understanding that it doesn’t exist. It’s as if we said “the vote of the people walking down the street.” And this is in Spain where 60% of homes have Internet and 55% of people have a smartphone. If we talk about hot topics from the perspective of a citizen who connects every day, the “fever” for mobile applications is the theme of the year. The “app-economy” is here to stay and is going to generate a great debate: The internet of the web browser versus the internet of applications in a closed environment.

When asked “who is under the skin, under the Twitter nick and in the depths of the blog and the Skype account of Jose Luis Antunez?”, he answered, “… a person who every 5 to 6 years needs to find new challenges in which design and empathy with the user are the stars of the show.” 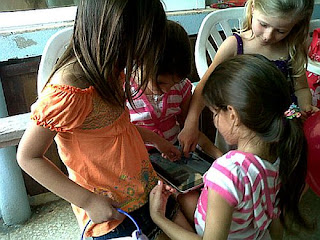 The above photo is from Yoani Sanchez's blog.  The caption is "Girls playing with an iPad for the first time at the Click Festival" 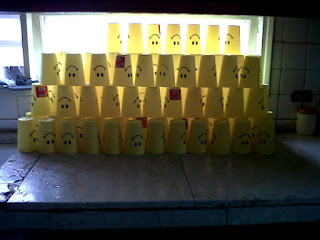 Yoani's Article shows the above photo and says, "The Click Festival Cups Reproduce Our Smiles."

The article is so good, I am quoting it in its entirety. In the English translated version, Yoani says:

“As I write this brief text the clothesline seems to be protesting under the weight of the laundry, the dog scratches at the door begging for his food, and my son asks me if there will be lunch today. After several days of neglecting the house the domestic routine calls me, pulling me away from the dream of kilobytes and returning me to everyday life. But it was worth it. Since last Thursday I have lived a preview of the future, a piece of tomorrow in the midst of this Havana trapped in the past. The CLICK Festival was just a foretaste of the topics that Cubans will discuss in the year 2020, and my restless grandkids in 2050. Three days to ‘think about technology, plan for it, and make it ours…’ developing an inclusive and plural atmosphere. The issues addressed ranged from discussions about artistic production in the digital age to the outline of a possible bill of rights for Internet users.

It proved to be very difficult to organize this event through alternative channels, in a society where each action is surrounded by obstacles and impediments, much more so if it is undertaken independently. So, several times, someone invited to be on a panel was not able to arrive in time due to transportation problems, the rustic audio equipment deafened us with its feedback, and the frugal snack was delayed longer than our stomachs could bear. But that was just the stage, the improvised physical context where the transcendental took place. With material simplicity, the CLICK Festival managed to exceed our expectations. The frank and open debate, uncensored, the great participation by the audience, and the success in pulling off a technological and futuristic event, were some of the major achievements. More than 200 people passed through the doors during the three days of the meeting, and on Thursday, in the afternoon, 102 of us, interested in social networks and Web 2.0, gathered. All the planned workshops took place and even the heavy rains falling over the city didn’t manage to dim the enthusiasm, although several people came down with colds thanks to wet shoes and the damp.

We could not, however, achieve as diverse as representation of Internauts as we desired. And not because we imposed an ideological or group filter, but because many of those invited preferred not to come. Fear of exchanging opinions, fear of the embrace, continues to dominate the Island — including the virtual scene. An editorial in Cubadebate — threatening and extremist — must have scared off some who would have liked to join us. Thanks to us the Cuban government hastily organized a “Knowledge Festival” for the same days, to teach people how to create blogs and Twitter accounts. Which to me is one of the best outcomes of our little CLICK Festival. If pushing the wall forces them to move it a few inches… then… then we have achieved part of what we want.

Next year the CLICK Festival will have to improve the level of its panels, create a WiFi network for the participants to download event materials, shed a certain level of seriousness in favor of making it more interactive, and manage to attract those journalists, bloggers and Twitterers who, this time, preferred not to join us. We need to reach younger people for whom the cellphone, keyboard and mouse are like extensions of their own bodies. Although — and it makes me happy to say so — several of them gatecrashed this edition. As a brief tweet on the #festivalCLIC said, “We are not only an event. Today a community is born.” So we see again, with the collaboration of Spain Blogs Event (EBE), the clumsiness of the official editorials and the playful and rebellious spirit of our internauts.”

It’s interesting that a country that is constantly tormented by Yoani Sanchez and others, and also by tweets from a number of dissident groups, would openly promote Internet-based instant access to the world.  But that is what the Click festival is all about. We hope Yoani’s dream comes true and next year’s Click Festival will move the country forward in its quest for communication, unimpeded by government concerns and strangulation.