We keep hearing from people in Cuba that they thought some things would improve with the new financial reforms, but for Cuban people products are no more available, and no easier to find than before.  Those with young children, especially those with special dietary or medical needs, continue to struggle to find the needed products.
Yoani Sanchez posted a story about the issue, called “Wholesale vs. Retail” In her article, she says, “I have the impression of being trapped in a permanent deja vu, in a reality where phrases, complaints and situations are almost exactly repeated. Today at noon I heard on the street words identical to those of last week; the neighborhood brooding over problems very similar to those of two decades ago, and at the butcher’s a long line seemed modeled on another of 1994 or 2002. It’s hard to shake the feeling that we have already lived this, of having fallen into a loop that brings us back, over and over again, to the same point we’ve already passed before. One of the recurring scenes is the pursuit of food and other basic products chronically in short supply in our markets. Going after a little oil, a package of sausage, or a piece of soap to wash clothes.”
The following photo was posted by a Havana resident to try find needed dietary products for his child. 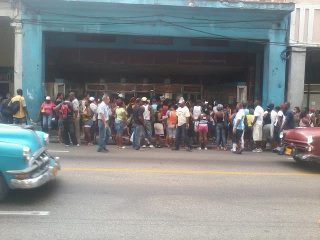 Yoani explains as well that the new business people don’t have a way to purchase their products wholesale, o they are competing with consumers in buying products at retail.
Yoani continues, “The long-awaited reform that allowed the rebirth of self-employment has generated some problems that are barely talked about. Lacking a wholesale market where they can buy supplies and raw materials for their small businesses, private workers have turned to the already weak retail network. They line up at dawn outside the bakeries and certain shops to acquire large quantities of merchandise that end up in restaurant and snack bar kitchens. Without any special discounts for buying in quantity, maintaining a supply of vegetables, grains and meats becomes a harrowing task, difficult and extremely expensive. In addition, they significantly decrease the availability of products for the non-industrial consumer, the individual shopper whose needs are only for home use. The retail majority.
The feeble State commerce is not prepared for the demand of recent months. Thus, it seems almost impossible to sustain over the longer term a coexistence between the private sector and the inefficient supplies from official companies. If this contradiction isn’t resolved, the time will come when pork, peppers and potatoes can only be found on the plates of paladares — private restaurants. And the neighbor who complains today, for the umpteenth time, about the absence of toilet paper, will have to visit the bathrooms of the new restaurants to remember what those rolls were like, so white, so soft.”