My Salary in Cuba is Worth 3.77 Sacks of Cement

I need to make some repairs to my family’s dwelling unit, to at least improve the condition of the walls, but the math does not allow me.  One bag of cement costs 110 pesos (if there is any available, but let's assume there is). My monthly salary is 415 Cuban pesos (about $15 U.S.). Assuming we do not eat or do anything else with the salary we could spend it on cement. 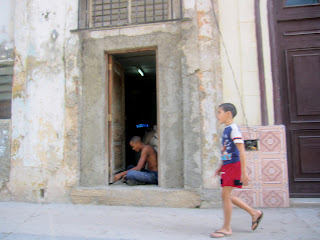 In March of this year, the United States Department of Treasury issue a statement entitled, “Advertising Educational Exchange Travel to Cuba for People-to-People Contact.”  As the title indicates, the article addresses advertisements by the steadily growing industry of companies that take U.S. citizens to Cuba for “educational” purposes.  But the article also points out the requirements that such entities must follow, and hints that some of these companies might be violating the law.

Addressing advertisement as the issue seems a little odd, but apparently somebody complained about the plethora of advertisements rather than the increased travel.  The memorandum states that “persons subject to U.S. jurisdiction” are not prohibited “from designing or accepting an advertisement related to licensed Cuba travel and publishing the advertisement in any medium, including providing a link to the website of the licensed organization (the “Licensee”) whose services are being advertised.” The memorandum then contains a long paragraph regarding legal advertisements offering such travel opportunities, and states that the licensee can advertise, but restricts non-licensed parties from advertising for a licensed party .  For example, a non-licensee cannot collect funds for travel or be paid a referral fee.

Organizations that that take tours of U.S. based persons to Cuba must be licensed to do so pursuant to U.S. law.  The article states that “These licenses authorize individuals to engage in travel-related transactions involving Cuba that are incident to engaging in educational exchanges not involving academic study pursuant to a degree program provided these exchanges take place under the auspices of an organization that sponsors and organizes such programs to promote people-to-people contact.”
The memorandum addresses the requirements that the licensee must follow.  The restrictions are aimed at the Licensees, and the focus of their advertisements; it does not address what the participants actually do. A prospective participant should realize that the ads that do not talk about tourist activities and off-hour activity does not mean there will be no such activities.

The memo states, “…each traveler must have a full-time schedule of educational exchange activities that will result in meaningful interaction between the travelers and individuals in Cuba. Advertising travel that appears to deviate from this requirement may prompt contact from OFAC [the Treasury’s Office of Foreign Assets Control] to ensure that the people-to-people travel meets applicable requirements and thereby complies with current U.S. policy with respect to purposeful travel to Cuba. Advertisements for people-to-people travel that give the appearance that trips will focus on activities travelers may undertake off hours after their daily full-time schedule of people-to-people activities may give an incorrect impression and prompt contact from OFAC that may potentially result in a license suspension while we investigate. OFAC does not authorize transactions related to activities that are primarily tourist-oriented, including self-directed educational activities that are intended only for personal enrichment….”

It concludes with a statement that “Licensees that fail to meet the requirements of their licenses may have their licenses revoked or be issued a civil penalty, which can range up to $65,000 per violation.”

The Miami Herald’s May 15, 2012 Article titled U.S. Changes Requirements for Some Cuba Trips, by Juan O. Tamayo, states that complaints  “have dogged the program since President Barack Obama approved it last year in a bid to increase Americans’ engagement with regular Cubans.

Sen. Marco Rubio, R-Fla., drew laughter during a speech in Washington last year when he read the schedule for one such trip, showing salsa dancing sessions every night. Other tours have met with Cuban government ministers and even a daughter of ruler Raúl Castro.”
The article quotes Rubio as saying, “…I still have concerns about the program in general, because it is difficult to manage and avoid abuses.”
The article also quotes a Treasury spokesman, who said the additional restrictions were issued “in part because of reports we received.” We wonder who was complaining:  other licensees, customers, the anti-Castro exile groups, or who.
Read more here: http://www.miamiherald.com/2012/05/15/2801235/us-changes-requirements-for-some.html#storylink=cpy

Living and Walking in Centro Havana Is Dangerous

Maintenance is uncommon in Cuba, particularly in the dwellings within Centro Havana. You will often find balconies propped up by two by fours.  I took these photos during my 2010 visit. 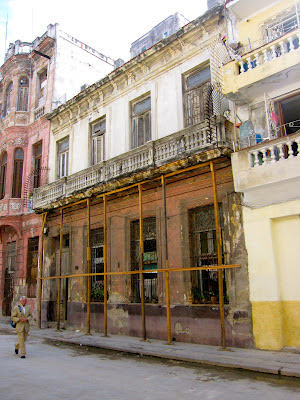 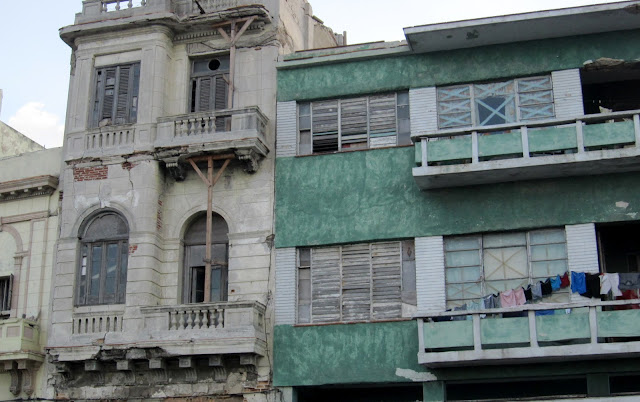 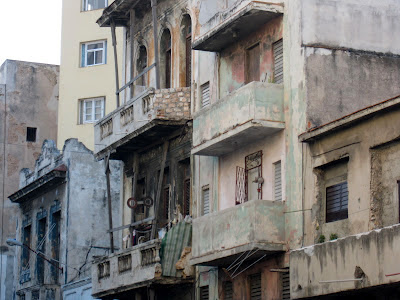 I made the mistake of walking on the sidewalk on San Lazaro, and was almost struck by falling debris. 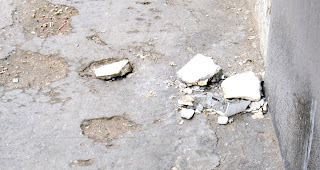 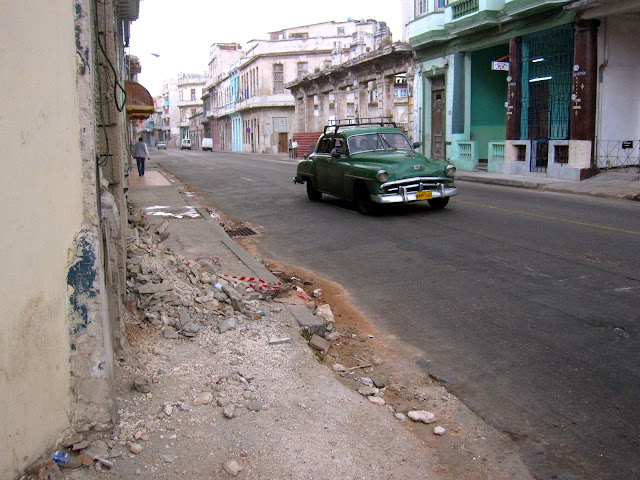 In 2012, I happened to come across workers actually propping up decrepit balconies. This was right across the street from the restaurant in the triangular building on El Prado (also known as Paseo de Marti) and San Lazaro, near the water.  The building where the balcony was propped up is the second one from the corner on the map below. The building fronts on Malecon and San Lazaro, to the right of the triangular building as seen in the photo. 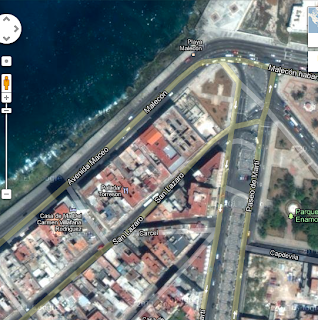 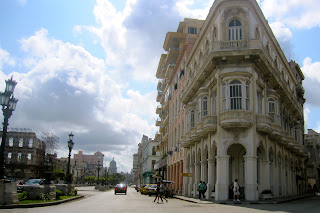 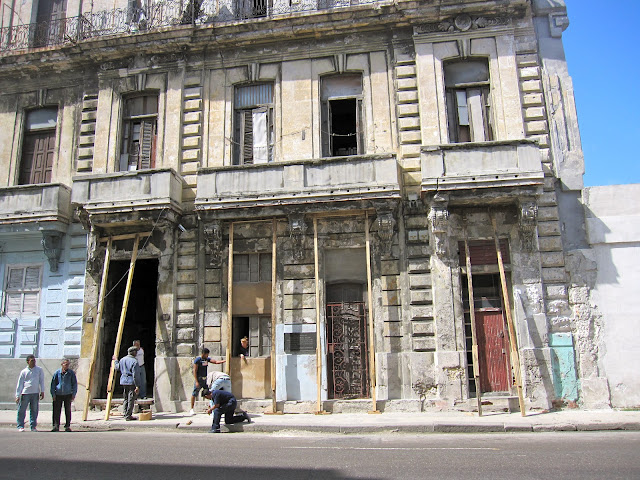 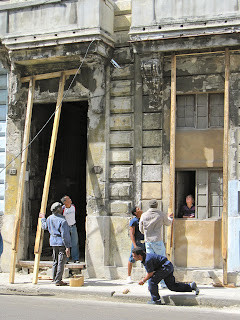 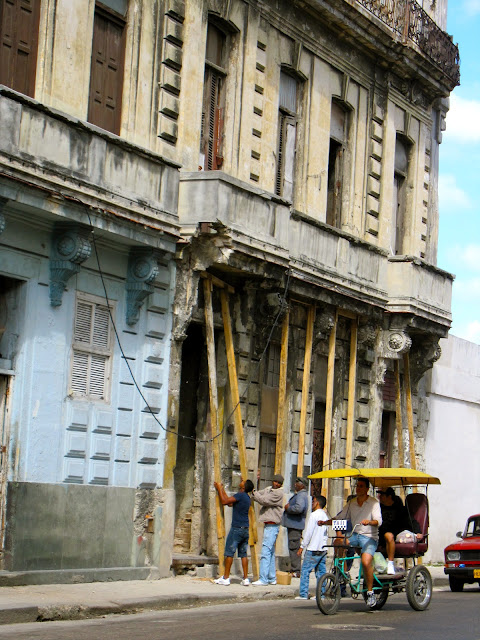 My hosts took me to see a building that fell down, killing children.  Below is a photo of what it looks like now, and one from a piece of a video of the recovery efforts. 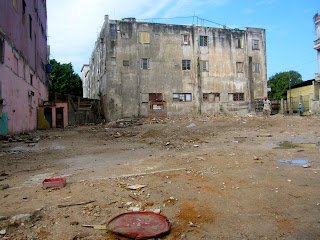 Time Global Spin writes that Florida enacted a new law that prohibits state and local government bodies in Florida from hiring companies that do business with Cuba and Syria. But when Governor Scott visited Miami this week to sign it and show support of the portion of the Cuban exile community that believes we should treat Cuba as though it doesn't exist, he stated that the law is actually unenforceable because only the federal government can enact such a law.

Besides the silliness of enacting a useless law, the article points out that the law will likely chill investment in Florida, which is struggling with unemployment and financial issues. It also addresses the new white card announcement that Cuba appears ready to allow its people to travel outside the country more freely.

See the following article.  Will the Exit Visa game go away soon?

Chavez' Failing Health and the Future

I spoke with people here in Caracas, Venezuela tonight (May 1, 2012).  They said their concern stems from the fact that Chavez was absent during the Summit in Cartagena, did not make a live speech in April, and did not make a live speech on Labor Day.  Especially with new laws being implemented today, it is very unusual for him not to have made a Fidel Castro-length oratory. Instead, he returned to Cuba on May 1 for more “treatment”. He did apparently issue statements on May 1, but the Venezuelan people say he would not miss his speaking opportunities if he was not near death.  CBS News and others posted apparent statements from Chavez on May 1.

The people are convinced he is dying.  Many are concerned that his death will lead to a massive strike and other government crisis.  Many have told me I should return to the U.S. today because I may not be able to leave when the crisis arises after his death.  There is quite a dichotomy of feeling – relief that he might die, and fear that he might die blend together in a feeling of impending turmoil.
As I was writing this post last night, CNN published a story saying most of what I was writing:

It opens with,  “Uncertainty rules in Venezuela, where President Hugo Chavez battles a cancer some believe has turned fatal.”

Cubans are also concerned about his possible impending death.  Venezuela is Cuba’s current Russia, providing the tiny socialist country with significant cash and petroleum.  That contribution is deemed to be all Chavez, who loves to give money to other small, struggling countries, and poor countrymen, in order to win their favor. But, it is believed that the contributions will immediately dry up if he dies.
Even Fidel Castro himself has weighed in on what might happen if Chavez dies.  That is very interesting, partly because he seems to give credence to the concern that Chavez will die, and because he is not talking about financial concerns that could arise from Chavez’ death.

See this link to a Cubadebate article published in Granma, the official Cuban Newspaper. Castro talks of social and economic struggles in Latin America, discusses slavery, Abraham Lincoln and Martin Luther King in the U.S. and the strong relationship of Cuba and Venezuela, particularly with Chavez.  Then Castro points directly to President Obama with a threat against action that might result from Chavez’ death, saying, “Under such circumstances, any mistake made by Obama could provoke rivers of blood in Venezuela. The Venezuelan blood is also Ecuadorian, Brazilian, Argentinean, Bolivian, Chilean, Uruguayan, Central American, Dominican and Cuban blood.”

Morgen Richmond comments on Castro’s writing in an article on Hot Air, in which he says, “Put me down as highly skeptical, and not just because of the source. With elections scheduled for later this year I suppose some political upheaval in Venezuela is possible, especially if Chavez dies at a critical point leading up to the election. But it seems a pretty safe bet that President Obama is not going to involve the U.S. in overthrowing the remnants of Chavez’s regime, even indirectly. … In any case, I don’t think Castro has much to worry about.”

So Latin America, particularly those of us in Venezuela and Cuba, sit and wonder whether Chavez’ absence and sudden return to Cuba is evidence that everything will first change.