The Pope in Havana – Is Cuban Life Improved?

It’s been an interesting period, preparing for the Pope’s arrival, and what really happened once he arrived. I tried to grasp it all from here in Havana, and to make sense of it. These are my impressions.

The Cuban regime became more paranoid than usual, arrested more people than usual, discouraged discourse, and tried to put fear into everybody.

The Pope didn’t say anything about any agenda he might have to listen to dissidents or relay any thoughts.

Dissidents tried to get their message out, hoping the Pope would listen and help get the government to end the oppression.

Chavez came for more chemo, and Venezuelans and Cubans wondered whether he was coming now to try to get an audience with the Pope.

As the Pope left Mexico to come here, we heard that his visit there was widely celebrated.

Once the Pope arrived in Santiago, the excitement continued. Arrests continued. Dissidents continued trying to get the word out, waiting for his visit to Havana.

The Pope arrived. I walked around, asking people on the street what they thought. Some shrugged. Some put their hands together as though praying and looked skyward. Some shifted their eyes, and drifted away from me. As usual, I had difficulty learning how the people in general felt. Maybe because not everybody feels the same, and many on both sides, as usual, are afraid to express their feelings.

Here in Havana, nobody knows about the Pope visiting with Raul, unless they have Internet, or are active in the dissident community. I know what was reported in international news, because I sneak to a hotel every day and jump on the Internet.

Cubans have reported huge internet and phone outages. One friend told me that this was the first month he still had computer time at the end of the month, because the government shut his access off. He said it was definitely because of the Pope’s visit.

The Pope “gently” prodded Raul about changes in the government. As always, Raul would not refer to the changes as movement towards capitalism. The Pope was vague. Raul vaguely denied. 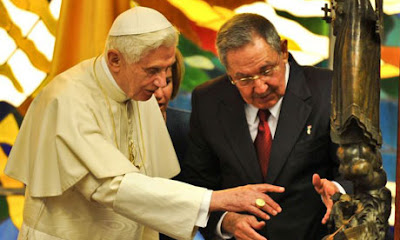 Then the question again became will the Pope meet with Fidel? Will Chavez manage to squeeze himself in?

The Pope did meet with Fidel. The Pope more boldly stated that personal freedoms were not being honored. Fidel did not wish to discuss it. 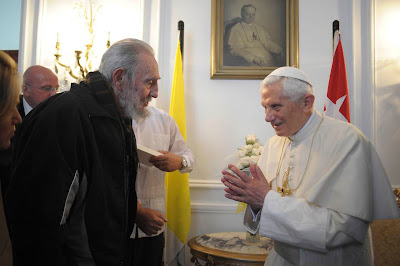 People who work in government jobs were asked to sign a sheet saying if they intended to go to the Pope’s talk or not. They didn’t know whether their “employer” wanted to know if they had religion, would be a supporter of the government in the audience, or would be a protester in the audience. People were afraid to answer. They were afraid to attend, even if they wanted to. 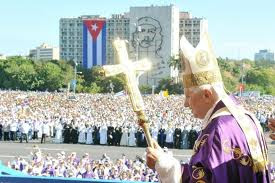 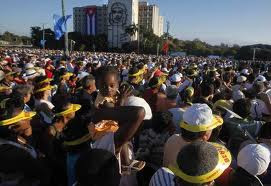 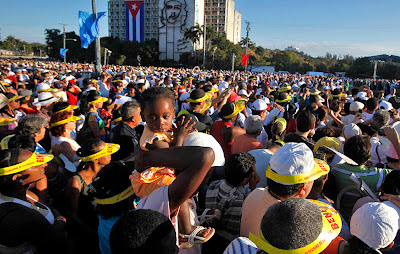 A brave – or stupid – or celebrity seeking young man named Andres Carrion Alvarez yelled out “Down with Communism” and was promptly arrested. Watch the crowd react against him and / or against the arresters.

And now, it’s over. See the following quote from Monsters and Critics.

“Havana/London - Pope Benedict XVI left Cuba Wednesday with a call for 'a fraternal society in which no one feels excluded' and a critical position against the US embargo on the communist island.

'I now conclude my pilgrimage, but I will continue praying fervently that you will go forward and that Cuba will be the home of all and for all Cubans, where justice and freedom coexist in a climate of serene fraternity,' he said at Havana airport. Earlier, the London-based Amnesty International had urged the pope to 'take a stand' on the clampdown against activists to 'silence them' during the papal visit, which culminated Wednesday with an open-air mass attended by thousands at Havana's Plaza de la Revolucion.

'In view of this situation, which contradicts his appeal for a 'more open society' in Cuba, the Pope should take a stand and lend his voice to those that have been left voiceless due to the ongoing repression and condemn the lack of freedoms in Cuba,' Javier Zuniga, a special advisor at Amnesty International, said in a statement.”