February 19, 2012 A Typical Day on My Visit, The Internet, El Templete

Like most mornings since I have been in Havana on this trip, I woke early today and went for a walk. I stopped at the Hotel Deauville and had coffee. When I stayed in that hotel last time, I had a couple of strong “cortados” each morning at the espresso bar. A cortado is an espresso with a little frothy, hot milk.

I had intended to bring my own espresso maker from home – I have a little pump gizmo called a handpresso, which you put boiling water into and a pod, and pump espresso – but when I found I was overweight in luggage, I pulled it out.

Even though Reinaldo says the casa particular is my house and I can do what I want, I haven’t really been shown around the kitchen, and so I don’t know what to do. I don’t feel comfortable to just go in and make coffee. Breakfast isn’t served until 8:30 or so, when the maid shows up, and the coffee is served with the breakfast.

I also wanted to use the Internet, but both computers at Hotel Deauville were occupied. They don’t have wi-fi, but at least they replaced their dinosaur computers, and gotten new keyboards and flat panel screens.

I’ve had trouble getting to the Internet, which is why I haven’t posted regularly. These computers are busy almost every time I come. I have walked all over town, going to various big hotels. Most don’t have wi-fi. Those that do often tell me they are sold out of the little cards one must buy to use it.

I returned to the casa particular at 8, when the maid arrived. She made a gigantic plate of fruit for each guest, with pineapple, watermelon, bananas, oranges and something else I don’t know. Then she served a plate of ham, cheese, macaroni salad, green beans, bread, etc. And a smoothie of watermelon and papaya, and coffee. 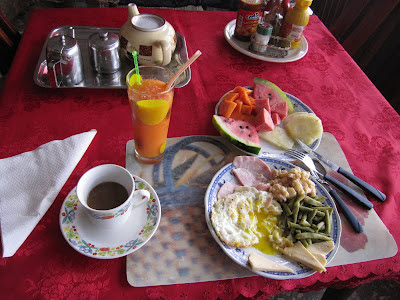 To work off all that sugar, I walked all over Havana, like I do daily, and took a lot of photos. Here are a few photos I took on El Prado: 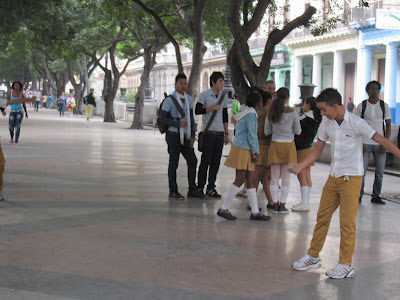 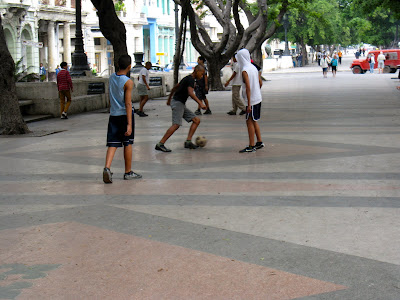 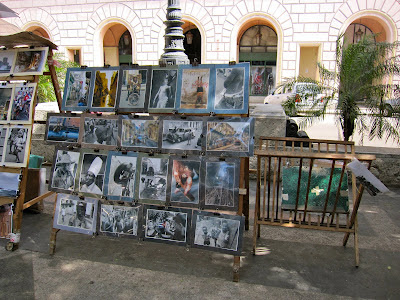 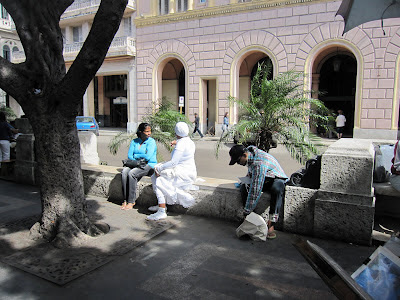 For dinner, I went to a state restaurant called El Templete. It's near the El Templete monument in Old Havana, near the waterway that connects the sea and the inlet to the harbor. I don't know if they are named for each other, but they are in close proximity. Templete in Spanish means temple. Here's some information about the restaurant and the monument. 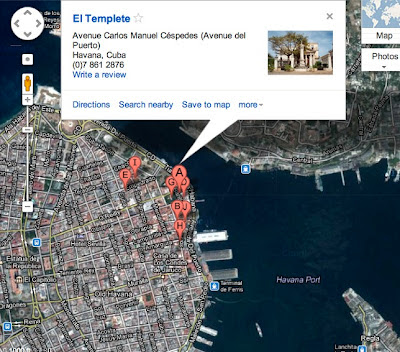 Wikipedia has a good explanation of the monument:

A photo I took of El Templete Monument: 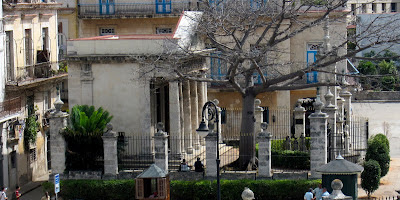 I had Chateaubriand. It was delicious. Things are so much different now than two years ago. They call steak Carne de Res, which means beef. Cubans still are not permitted to buy beef for personal consumption unless they have a young child in the home, in which case they can purchase a small amount. But it seems to have become much more common for restaurants and even paladares to sell it in the last two years since I was here last.

The steak was delicious, tender, cooked perfectly. It came with three sauces – chimichuri, rocquefort, and mushroom.