Part of the reason I came to Havana at this time was to catch the end of the Feria Internacional del Libro, or International Book Fair. This is an annual event to which the government invites authors, publishers and others from other countries, promotes literature and education, holds cultural events, encourages the populace to enjoy reading, and sells school books and other books at incredibly cheap prices. It travels from city to city. I will follow it to Matanzas, and possibly to Cienfuegos.

Since today was probably its last day in Havana, I went to all the events I could find. First, I went to a small venue in the rich Vedado area of the city. Then, I went to the large venue in Fortaleza de San Carlos de la Cabaña, which is the area that is adjacent to the Morro fort across the inlet from the city. While the Morro was the actual guard tower that protected the inlet, the Cabaña was like a city, occupied by the military of the time. Its open areas, and enclosed rooms host the Book Fair. 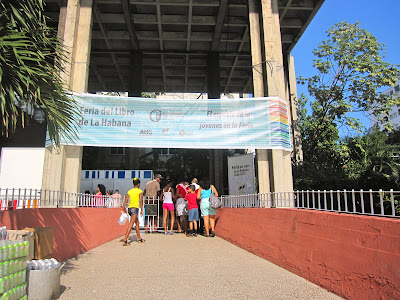 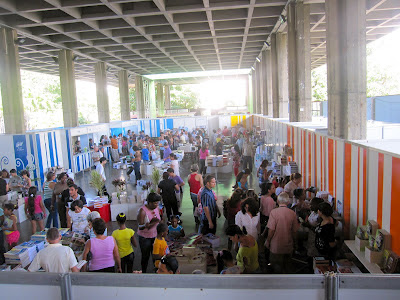 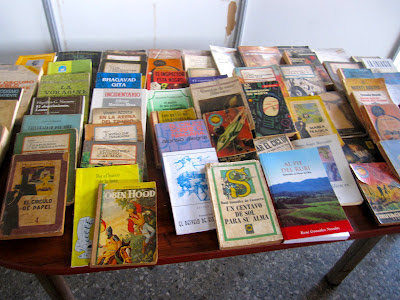 I will have to explain again how money works in Cuba. The government issues Pesos Cubanos, and Pesos Convertible, known as CUC (pronounced either Ku, or say-ooh-say (phonetic). Pesos Cubanos are the money that is issued to people who work in any type of government job. CUC are what the foreigners use. People who work with foreigners, like taxi drivers and other service providers, live on CUC. A person like Reinaldo, the owner of the casa particular where I am staying will only have CUC, because he does not work for the government, and the people pay in CUC. A CUC is similar to a U.S. or Canadian dollar in value. A Peso Cubano is worth about 1/10th what a CUC is worth.

Just like there are money exchange kiosks to exchange foreign money for CUC, there are also separate facilities to exchange Pesos Cubanos for CUC and vice versa. Generally, no foreigner would have a Peso Cubanos unless he made the mistake of exchanging money on the street and was tricked.

I experienced the strangeness of this dual money issue the last time I visited, and it was the same this time. Reinaldo took me to the Book Fair at the Cabaña, and also brought along some family members to accompany me in. Because they were female, that also raised additional issues (i.e. Cuban consorting with foreigner = suspicion and possible arrest for the Cuban).
Anyway, most museums and public venues charge 1 to 4 CUC for a foreigner to enter. They charge the same number in Pesos Cubanos for a Cuban to enter. A Cuban will be very upset if a foreigner just pays CUC for him or her to enter, when they could enter for 1/10th of the cost.

But, as I said, this family does not have Pesos Cubanos. Nobody works for the government. Sometimes, a venue will allow a Cuban to enter by paying about ten cents, CUC, being about 1 Cuban Peso would be worth. But often they refuse. Then the Cuban has to go around and beg for somebody to exchange with them, so they can have a Cuban Peso to pay to enter. That’s what the women had to do.

Reinaldo had no interest in books, so he left us to go in alone. The women I was with were trying to find dictionaries, spelling and handwriting books for their kids. So we got into a line outside a tent that had books for sale. We knew they had those kinds of books because there was a pallet outside.

A sign on the tent said that one could only pay with Cuban Pesos. It also said you couldn’t take any purse or bag inside. So one of the women took the purses and went to find a place to check them, and went to exchange some CUC for some pesos. 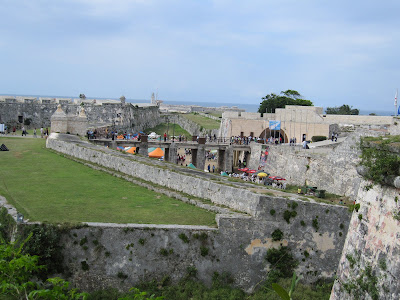 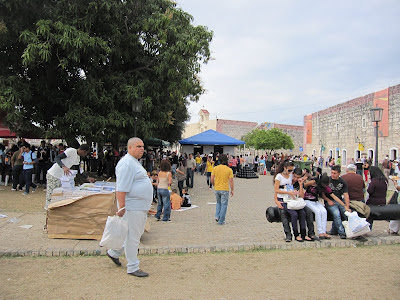 The whole episode was so Cuban. We stood there for an hour, first waiting for the crowd inside the tent to pay and leave. Then we waited while workers carried in the books from the pallet ten or twenty at a time. Then we watched workers organize the books on the shelves. Finally, an hour after we thought we were entering, we were in. There weren’t many choices – nothing I wanted. I was looking for fiction by Leonardo Padura. The women were stocking up on books for the kids. 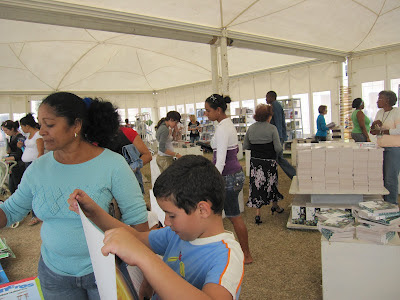 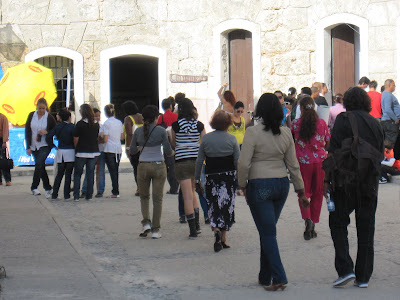 Then we left and went to another tent. Then we walked around looking for international books. The women stocked up on multiple books and we had trouble lugging them to the car. They had changed ten CUC, about ten dollars, for pesos. They bought about fifteen books, and still had pesos left over. So it was obvious the government subsidized the books for the young Cubans. 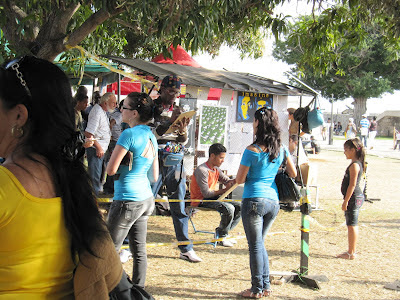 A lot of kids ran around at the fair. There were some music and other events. There was some government propaganda. It was an experience.

Here is a site about the Book Fair: