In the cab, a beat-up Russian Lada, we headed northward, towards the coast and Centro Havana. We passed the sports arena and familiar open streets on the outskirts. Then we were in the depths of Centro Havana, on tiny, pot-holed streets with buildings close on each side, few cars, streets filled with people standing and conversing --- walking, sitting --- balconies propped up by two-by-fours, crumbled pieces of rock littering the ground. We snaked through it, this way and that, for fifteen minutes. 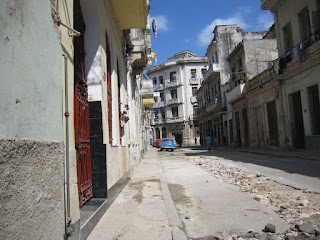 Then, we were at the little apartment occupied by Oswardo’s mother since the 50’s, by him since he was born, and now also by his wife, Yoana and two children. They had a baby girl since I was last there two years ago. 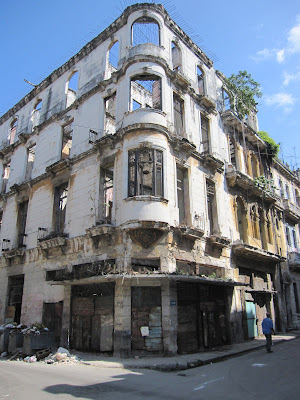 The mom stood like last time, in the metal, barred, locked gate that is the front door. Inside, I met the new daughter – shy, sweet, beautiful. Yoana and Oswardo’s mother were there. Oswardito was at school. The apartment was the same as last time. A tiny front room with a couch and two rocking chairs. An entertainment center sported a black and white t.v. with rabbit ears, and a dvd player. 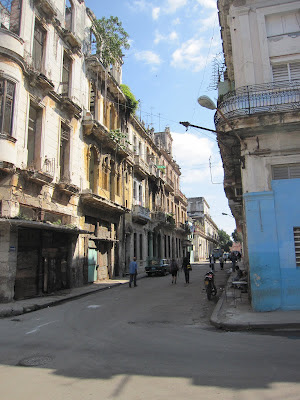 Looking back in to the unit from the living room, one can see an open porch area, and a bedroom. The porch area is open to the sky, so the entire apartment is accessible by thieves. This is why they never leave it completely unoccupied, although there really isn’t much crime in Cuba. The bedroom has a bed and dresser. Straight through it is another bedroom. Behind it is a little loft, and to the left, behind the porch area is the kitchen. The table is in the kitchen. There is a sink and gas stove, a small, working refrigerator and an unplugged refrigerator.

I had cafecito, sat in the rocking chairs, talked, and socialized. After a while, I unloaded all the gifts. I had brought a ton of clothes for the children. They were excited about them. Oswardo loved one of the two shirts I had gotten for him. The little girl became attached to her doll, which she named WaWo.

When Oswardito came, he loved his soldiers and clothes. I think some were a bit bigger than he is.

Although Yoana had seen erasers that you put on pencils, nobody else had.

Oswardo showed me the notebook that the school issues, which was all beat up. He said Oswardito would definitely enjoy these.

Oswardo put on a video of a Shakira song, and the little girl danced, grabbed her hip and said, “Loca.”

Dinner was served. Oswardo, Yoana and I sat at the table in the kitchen. A scrawny cat came out from behind the fridge, and Oswardito picked it up. Oswardito ate a little black bean soup, but he was much more interested in the candy canes I had brought, and kept gobbling them up.

The meal was black bean soup, pork, moros, platanos, and yucca. Oswardo’s mom was like my grandmother, hovering and begging me to eat more. It was delicious, and I was very full at the end. Then we had another cafecito and Oswardo went out.

Somehow, he found a driver in a very beat up old car, without a taxi sign, but he said the man was a driver, not a friend. Oswardo accompanied me to the casa particular, or private home, where I would stay.