Human rights continue to take a back seat in Cuba, where many people have been arrested in recent months. Reporters say things like, “Family arrested while taking flowers to grave.” We know what that really means. The arrestees are dissidents, who loudly and regularly proclaim their outrage at the lack of human rights. Their actions anger and concern the government, so the government harasses, arrests, and imprisons them. But while one may say, they deserve it, how else can they be heard?

I always find it interesting that the dissidents are no more vocal or dissident than was Fidel himself so many years ago. At the same time, I always think ‘why can’t the people take over the government?’ Because the government does not allow them to combine, to plan, to converse in any useful way in order to initiate a cohesive rebellion. Many people talk, and take action, but it’s like individual shots in the dark.

So the government’s stance in preventing communication is working. And Fidel’s government really doesn’t give a crap what the human rights coalitions, the Americans and other driveling complainers have to say about it.

A few days ago, while Willman Vilar was still alive, although on “life support”, Babalu blog posted a story about this. It said, “The Castro dictatorship cannot seem to keep up with the acts of resistance taking place in Cuba.” It goes on to say that the “… dramatic increase in violent repression against the opposition has not quelled the resistance in Cuba but has seemingly emboldened them further. While the regime brutally quashes a protest in one city, another protest materializes in some other city. It appears the Castro dictatorship has found itself in a never-ending game of "whack-a-dissident," growing more desperate with each passing day.”

Then the government arrested a reporter for reporting these stories: Bablublog reported the arrest of Dania Virgen Garcia saying, “Unhappy about their violent acts of oppression being reported to the world, the Castro dictatorship has arrested Garcia to impede her from filing further reports.”

Yoani Sanchez, famous Internet dissident extraordinaire, tweeted the following today: “#cuba My husband @rescobarcasas was arrested this afternoon but he was released. The situation is tense as a violin string on here :-( …”
I found this interesting graffiti the last time I was in Cuba. Remember ….? 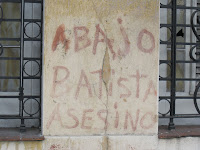