Report From Enrique Regarding His Life In Cuba

Enrique – Age – 70’s; Birthplace – Havana, Cuba; Residence – Santiago de Cuba; Lives with Wife and Extended Family; Occupation – Retired, Previously Worked in Various Government Jobs, in Bodeguitas, Museums, Restaurants
By mail
Buenos dias, Franklin:
You asked me to write to you regarding my views on life in Cuba. I enjoyed very much meeting you when you were in Cuba. Matilda and Yuris send their regards, and they enjoyed it as well.
As you know, we live in a modest dwelling in Santiago de Cuba. Santiago is in the south-easterly area of Cuba, a little west of Guantanamo. The city proper rises above a large, protected harbor on a hill inland from the mouth of an inlet.
It is a beautiful, picturesque city, and second largest and most populated in Cuba. It is the city where musicians who perform music known as “la trova”, which means a type of roving, folklorist musician, can be found in many places, including Casa de la Trova, playing beautiful and original music. It is also the historic base of the annual Carnival in Cuba.
You seemed to ask how we cope with an oppressive and communist government. Well, Franklin, we just don’t see it that way. We live a good life, better than the lives of many people around the world. We do not live in fear; we have little crime; our basic needs are covered. Maybe it’s that I am an old man, but nobody from the government or the party watches me, or bothers me in any way.
Santiago is a clean and orderly city. One can walk in the streets without seeing trash or garbage. We have restaurants, hotels, banks, stores, and everything else that a city in a thriving economy would have. We have a popular beach, Siboney, not far away, a mountain range, panoramic views, and industry. We have museums, musical venues, and international visitors. We have a newspaper and television, and know what is going on in the rest of the world. How is Cuba different from other countries? I have never traveled outside my beloved Cuba, but I believe in many ways we are more orderly, peaceful and autonomous.
My wife and I are both retired from years of working nice, normal jobs. We worked in restaurants, hotels and other jobs. I also worked in the Siboney Farmhouse museum and the Moncada museum. The businesses have generally been operated by the government, so they were government jobs. All workers in Cuba receive a monthly income in Pesos Cubanos, and we use that income to buy our basic supplies, including condiments, food, cleaning products and similar items. The ration system is not a negative. It is how the government controls the purchase of these items and assures that there is enough of such items for all of us.
Our daughter works in a business that sells telephone cards, has telephone booths, and has computers and Internet access for the public. I have never understood or had any interest in computers, e-mail or the Internet, and I am not even sure what it means, but, after all, I am over seventy years old, so I imagine I am not that different from others in the world.
Our home is below the balcony of Velazquez, which is a flat balcony / tourist site, from which one can get a nice view of the harbor. We are a few blocks from the harbor. This is the same home where my wife’s parents lived. We shared the home with them while they were alive. It is a three-bedroom home. I have no complaints. It is home.
So that is how I feel about Cuba, Santiago, and our government. We love it all, and are very content.
We hope you are able to return to see us some day. We look forward to it, and hope you can bring your family as well. 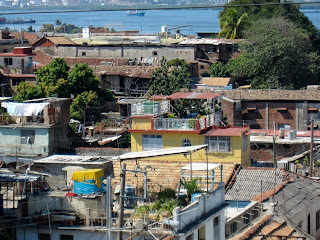 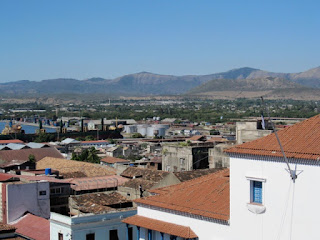