Dear Franklin,
My brother, Juan, asked that I write to you when he was here last. I enjoyed our visit last year, after so many years apart.
For your readers, I will state what we already know.  That you and I are cousins, who grew up in the same neighborhood of Santiago. My brother, Juan, lives in Miami, where you live. I have never left Santiago, and have always lived in the family home. I live here with my husband and child. The house we live in is not luxurious, although the neighborhood once was. But the house is long, having of nine bedrooms.
I earned an advanced degree, which means I earn about $5 more per month than a manual laborer.  Basically, I am comfortable, though I rely on my brother Juan to supplement our income by sending cash from the United States.
I love Cuba. It is all I have ever known. I love my home and my family. Our city of Santiago is the second largest in the country, but it does not have a large inner-city slum area.  We have some poor areas, which were poor prior to the revolution.  My neighborhood, which is called Vista Alegre, can be seen on Google maps, towards the highest part of the town. Santiago rises up from a harbor, and the harbor is well inland and protected from the open ocean.
I recall vividly when we were young, before you were sent away at the age of six, playing in the park and on the streets of the neighborhood. I understand why you don’t remember. Being sent away had to have been traumatic, and I realize you blocked it out. But I do remember. And those were fun times. Our parents worried about the government, the riots, the killings, the terror imposed by Batista, and then the terror imposed by the Revolutionary government. But we were children, and I never really understood at the time.
You were born the year of the failed Moncada attack (1953), and I was only two when you were born, so of course we don’t recall anything about it, but Juan remembers hearing gun fire on the morning of the attack. As you know, the Moncada is not that far from our home. In fact, I know you walked here from your hotel when you came to visit last year, and the hotel can be seen from the Moncada. Juan says that it was common to hear of killings and beatings in the early 50s, and that he and his father found two men shot to death right in front of our house in 1953. That was what the Batista government was about. That was what the people wanted to escape when they allowed Fidel Castro to take over. What it became was not all we expected or desired. I still feel it is and has been better than it was. This is not a violent country. The government does not beat citizens. We have courts of law that administer trials and imprisonment justly. Our basic needs are met by the government. There is little crime, little drug abuse, little danger. It is not perfect, but it is what we have.  Life here is much safer and much better than many countries I could name.
I know acquaintances and family who have escaped to Miami call me a communist and criticize me for not railing against the government. But it is my lot in life. My family and I survive, and our lives are satisfactory -- certainly no worse than the lives of many, many people in other circumstances around the world.
I hope you will come to Cuba again, and that we can sit and talk more. I loved hearing about your life and family, and your dear father, Luís. He was a wonderful man.
Affectionately, your prima favorita, Doris 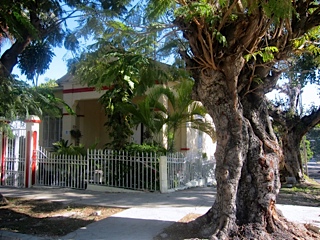