Report From Oscar - About Fighting for the Revolution – The Moncada and the Aftermath – Camaguey, Cuba – August 18, 2011 – Via Delivery by Hand 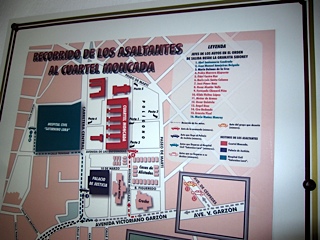 [Photo from Franklin Marquez – Taken from Wall Depiction at Siboney Farmhouse – Shows parade ground (Poligono) outside Moncada, officers’ quarters, (Casas de Allistodores) hospital and courthouse (palacio de justicias. This is the courthouse where the trial was held.]
After some time, solders rushed into the hospital.  I grabbed a hospital patient gown from a table, slid into a room, and climbed into an empty bed, where I feigned sleep.  Little by little, while concealed under the sheets, I removed my uniform pants. As I tried to remove my uniform shirt, a soldier rushed into room room, ran to me, pushed me with the muzzle of the gun, pulled down the sheet, pulled the neck of the gown out so he could see the uniform, and arrested me.
Along with over a hundred others, I was a defendant in the trial, which went on for weeks.  Fidel Castro, representing himself, tried to turn it into an attack on Batista’s government. He gave his speech – “History will Absolve me” at the end of the trial. But almost all of us were convicted, and sent to the Isle of Pines, to the “Model Prison.”  I had to put up with Castro’s speeches in there for almost a year before being released.
When we were all out of prison, I decided that Castro was still the best choice to lead the country. I became a follower again. After the Revolution, I went to work for the government. I know you expect me to criticize the government, Franklin, but I cannot, and I will not. We Cubans have what we need. Our government is making strides daily to improve our situation. I am convinced that our situation is the result of the U.S. Embargo and Russia’s abandoning us.  I’ll tell you more about current life in Cuba in another letter.
Un abrazo fuerte.  Su amigo, Oscar.