I hope this letter finds you and your family well. It was a great pleasure being able to meet you and spend some time at our humble farm here in Camaguey earlier this year. I am only sorry that our offerings were of necessity so meager. But you are aware of how limited our supplies are here. I am writing to you as you requested, to explain my history and our current lifestyles. I am sorry it took so long.

As you know, my family and I live in the countryside, near Camaguey. We live in the same home as my grandparents and then my parents lived in. At one time, it was a fairly large farm. But in the regimes of the 40s, 50s and 60s, farmland was taken away, so we have very little that we can use now. We and three neighbors share a cow, which provides milk. We have a few chickens, which produce eggs. We grow some vegetables. These things may seem inconsequential, but they actually provide tremendous help.

I am retired now, so my monthly income was cut in half --- from thirty U.S. dollars equivalent a month to fifteen. And with the new financial “improvements”, as our government sees them, things like soap and toothpaste are no longer sold in the government bodeguitas at subsidy prices.

Thank goodness we have our son and daughter living with us, with their spouses and children. Our son and our son-in-law both work for the government, paving the highways, which is the same work I did when I worked. Drudgery under a baking sun, shoveling steaming asphalt by hand. Thus, we have two and a half monthly incomes, which helps very much. Cubans have no housing expense, and no medical expense, so we get by on these earnings and what our shared farming generates.

You wanted me to tell you about the times before Castro. I was in my thirties when we went through one tyrant dictator after another. Unbelievably, after we got rid of Batista once, he got elected again, from Florida, and became worse than the first time. I was a soldier in the army. It was a job. I had no allegiance to any government, but I was also not part of any group looking to overthrow the government. I just survived. Like now. It was a job. No different from paving roads, as I did later. I would stay at the Moncada army barracks in Santiago, Cuba for days at a time, and do what I was to do. We were not at war. We cleaned, repaired things, marched, practiced shooting, held official ceremonies. We were soldiers. We also drank, caroused, walked the streets, and enjoyed ourselves. Since most of us lived some miles away, and it wasn’t convenient to go home often, we had our time out, right in town. The people were very unhappy with Batista, but we just survived.

Photo of graffiti, posted by Franklin Marquez, which remains intact on a city street now in 2011 – It says: “Down with Batista --- Assassin” 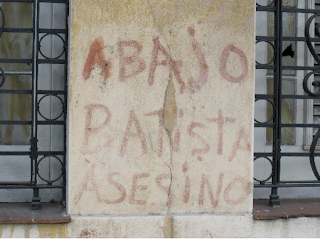 In 1953, six years before Castro final took control of the government, Fidel Castro and a bunch of revolutionaries wanted to stage a coup. They concocted a ridiculous plan to overthrow the Moncada army barracks. During the week of the annual celebration in the streets in Santiago, they thought by the middle of the night, we soldiers would all be drunk and sleeping, and they’d put on fake or used army uniforms and sneak in, surprise us, and take over the country. It sounds ridiculous, doesn’t it? They came to Santiago from all over Cuba, but most came from Havana. They arrived by the carload, and others came by train. They brought arms and supplies. They stayed in several safe houses around town, and also the Hotel Rex. I know you saw that hotel, a couple of blocks from the Moncada when you were in Santiago. They also rented a little farmhouse on the Siboney Highway, about halfway between downtown Santiago and Siboney Beach. All the groups converged on the farmhouse the night of the attack for distribution and donning of uniforms, distribution of rifles, and review of final plans.

Photos from Franklin Marquez – Hotel Rex Photo from Siboney Farmhouse Museum. [Sorry about the reflection from the window]. Receipt of food eaten by the revolutionaries the night before the attack; Hotel Rex now. 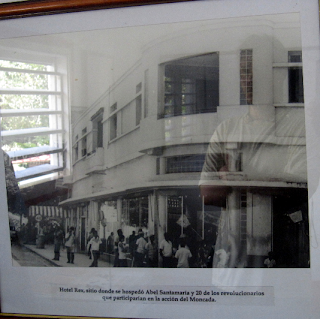 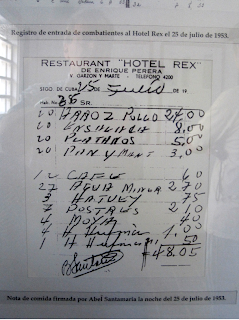 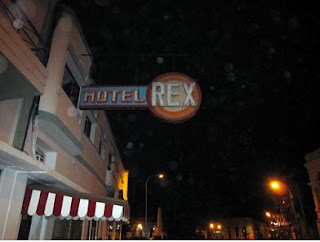 There were rumors that something like the attack might be going on, but the officers of the Moncada weren’t very concerned. They staged a few extra sentries, but the highest officers were out dancing in the streets. Castro and his men figured we’d all be smashed and unconscious. But that’s not what happened.

At five a.m., I was lying on my bunk, half asleep, thinking of my wife and family, when I heard the bang of a door, the sound of boots running on the floor, a gunshot, and then yelling. My rifle leaned against the wall behind me, and in a second I was up and armed. So were the other five soldiers in the room. We signaled each other in the dim light and separated into different corners of the room, armed and ready.

Three men, dressed in what appeared to be uniforms, ran in, holding rifles. We yelled, “Halt,” and startled them. In seconds, they dropped their rifles and put their arms behind their heads. We ordered them to the ground, left one soldier on guard and rushed through the halls looking for other infiltrators. The fake soldiers were more surprised to see us than we were to see them. They seemed to have no contingency plans, and no knowledge of what to do with their rifles. We took several more prisoners. The sound of machine gun fire outside echoed through the halls. We knew it was the sentries in the guard towers across the parade ground, so we stayed inside. Other legitimate solders raced, along with us, from room to room. We found fake soldiers cowering in corners, hiding under desks, walking around like we wouldn’t know the difference. It was laughable. We heard other gunfire outside, but we weren’t sure how many were there, where the shots were coming from, or whose guns were shooting. We cleared the entire inside of the second floor of the Moncada within about twenty minutes, and waited.

The rifle and machine gun fire halted, and we snuck a peak outside, carefully, to avoid being shot by our own men. Real soldiers walked among prone and bleeding intruders on the parade ground, while others stood guard above a group of prisoners. We brought our prisoners to the parade ground. Officers showed up from wherever they had been, and ordered the troops to separate the prisoners into groups and take them in for interrogation. Others were locked in the brig. Other troops brought in prisoners who had been caught near the officers’ dwellings and the streets.

Photos from Franklin Marquez – The Moncada now houses a museum and school. The bullet holes are real. They are from machine guns shot by the sentries in the guard tower across the parade ground. The hotel in the background is the Meilá. 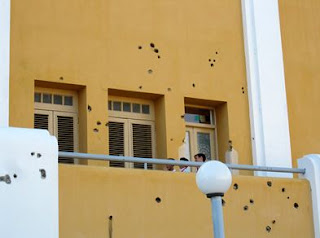 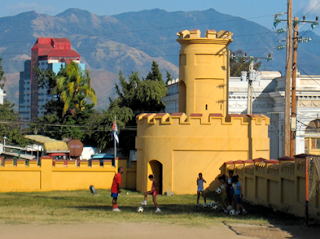 We heard more gunfire, and shouts from the opposite side of the barracks, and an officer shouted to our group to rush to the hospital, which was across the street. As we rushed off, the officer ordered another group to the courthouse next door, where there was also apparently some conflict. As we arrived in front of the hospital, we saw men running, some yanking off fake uniform shirts, cars zig-zagging, skidding around corners, activity everywhere. A car pulled up in front of the hospital, a door opened, and revolutionaries tossed a bleeding man onto the asphalt. We rushed in. A nurse pointed to two men, scrambling up the hall dressed in hospital gowns, and said, “Stop them; they are intruders.” We did. Another pointed out a man dressed as a doctor. We had some trouble figuring out who was who, but little by little we found the Fidelistas and rounded them up. We heard shooting and ran into the operating room, where we captured three more prisoners without shooting. We took them all back to the parade grounds.

A corporal and I were ordered to throw a couple of gruesomely shot-up bodies into the back of a pick-up truck and take them to the Siboney Farmhouse, which was the staging area, and drop them on the front lawn as though they’d been shot there. We didn’t think it would be very authentic looking since they were full of holes from machine-gun fire, but we did as ordered. We drove the twenty-five minutes or so to the farmhouse, where we found other groups of soldiers pouring over the property and inside the house. We dropped the bodies in the yard. As we were leaving, the other soldiers fired at the house, leaving bullet holes in the walls, just like those at the Moncada.

Photos from Franklin Marquez – Siboney Farmhouse. Bullet holes shot after the attack had failed, when bodies were deposited in the yard by Batista forces. 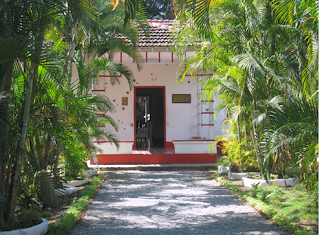 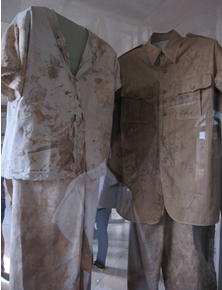 The rest of the morning, prisoners were interrogated. From time to time we would hear one or two shots. We learned later that these were executions of prisoners who were not forthcoming with information. Finally, it was over. Newspaper men came and photographed bodies, some of which had been moved and staged. They were also directed to the farmhouse to photograph it. Almost one hundred fifty prisoners were locked in various secure places to await trial. Months later, I was a guard in the lengthy trial at the end of which Castro and almost all the others were convicted and imprisoned at the Isle of Pines prison. Castro was allowed to represent himself, since he was a lawyer, and made his famous speech, “History will absolve me,” at the end of the trial.

After some months, some were released from prison, and a year after being imprisoned, Fidel was also released. I never understood why they let him go, since ultimately he was able to return and overthrow the Batista government.

Well, Franklin, that’s my recollection in a nutshell. There’s a lot more to it than that, but you wanted to hear my side of it, and this is it.

I hope you get back to Cuba sometime, and we can talk more. Please add some of the photographs you took where appropriate when you put this on your blog.